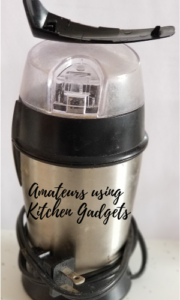 I have a coffee grinder designated to grind flax seeds only. One morning while I was busy making breakfast my husband came into the kitchen and began organizing a bunch of ingredients to the side of the kitchen counter. This is not that unusual as he is a bit of a mad scientist and likes to create new recipes as well. After he was done gathering all his ingredients he asked me for the coffee grinder. “That’s for flaxseeds only” I said. He persisted in his request and so I pointed in the direction of my flaxseed grinder. Being unfamiliar with this device he began to pock and yank at different parts of it. Not long after I heard a snap. He broke something on my flaxseed grinder. I quickly came to the scene of the crime and discovered that he broke the handle that is essential to turn the motor on. I was not happy. I wanted to ask him to leave my kitchen and not enter as professionals were at work. Fortunately my better sense took over and I demonstrated to him how the grinder works and assured him it was nothing to worry about as we could order another one online. Being the classic “Mr fixer” he figured out how to operate a broken grinder and continued with his experiment.
This is not the first time I’ve been tempted to banish my husband from the kitchen. And to be honest he is not the only one I have wanted to place a “Do not enter” sign up for. My little children are often eager to help in the kitchen as well and they are expert at slowing down my progress. They are guaranteed to make a great mess and they put away my measuring spoons and utensils in the most bizarre places. Despite all these minor inconveniences though the kitchen is a perfect training ground for the entire family. I may have a few more skills in cutting and mixing but that came with time and a lot of practice.
As a family our goals are to eat more whole food plant based, eliminate junk and processed food, eat meals that have been prepared at home instead of eating out and eat more of our meals together. With ambitions like these it would naturally seem that the kitchen would be the perfect place to start. Not just for me but for the entire family.
As for my mad scientist… his experiment turned out quite well and we all enjoyed whole wheat corn cakes with breakfast!

I am Dr Kathy, a wife, mother of four and an internal medicine physician. I have always been fascinated by the human body and how marvelously it works. Read More… 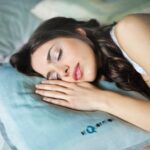 It’s one thing to know we need more zzzs but sometimes it’s a little hard to actually catch them. More than half of adults have some difficulty with sleep and a how to guide would be super helpful. One of the best ways to improve sleep is to follow  your body’s biologic clock.  It’s actually…

END_OF_DOCUMENT_TOKEN_TO_BE_REPLACED 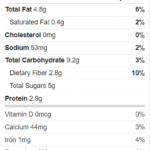 This simple salad  is naturally low in sodium and high in potassium which is the exact balance of minerals needed in any diet to help lower blood pressure. The perfect sodium-potassium ratio is found in fruits and vegetables. This is why these foods must build the foundation of an effective blood pressure lowering diet. Ingredients…